How to ReFILE a T1 return

If you are an EFILE service provider, you can use ReFILE to send T1 adjustments online for tax years 2018, 2019, 2020, and 2021 on behalf of your clients. The ReFILE service lets you change the same lines that individual taxpayers can with the Change my Return service in My Account.

Who can use ReFILE?

Preparers can use the ReFILE service if the following conditions apply:

What tax years does ReFILE support?

Please see the Frequently Asked Questions section at the bottom of this article for more information.

You can also review the CRA EFILE for electronic filers page for additional information.

Prepare a Return for ReFILE

ProFile recommends that preparers save the return as a new file, using the Save As… option from the File dropdown menu in the top toolbar.

You can review our tutorial video on completing a T1 ReFile Request form below: 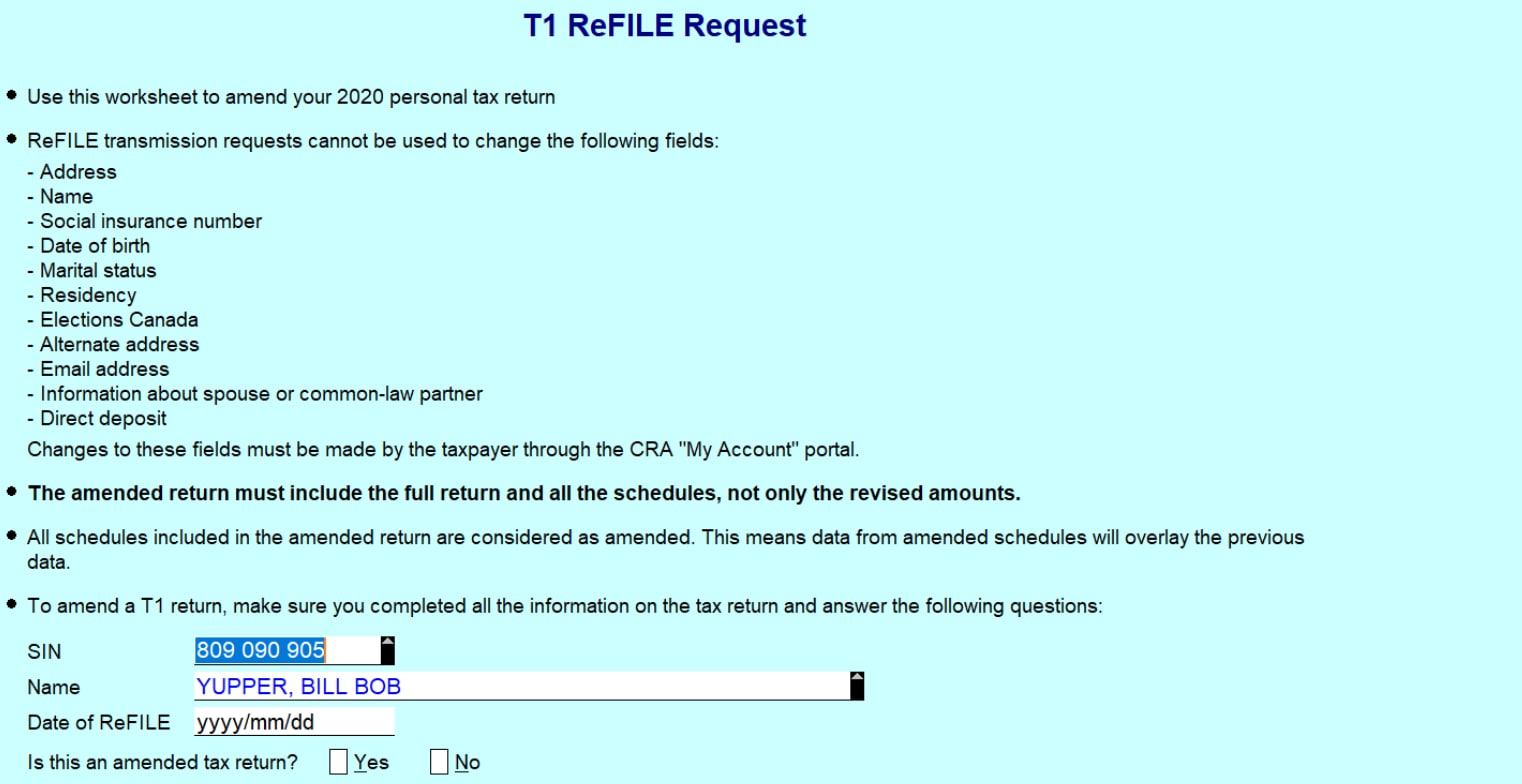 3. Enter the current date in the Date of ReFILE field:

4. Select the Yes option in the Is this an amended tax return? field:

Note: If you fail to select the Yes option, you'll get an error when attempting to Re-file.

5. Answer the subsequent questions in the form. Note that in 2019 the question section in the image below was removed and replaced with a Notes section:

Verifying an Authorize a Rep form is Present

A valid Authorize a Rep form with level 2 authorization must be on file with CRA for any ReFILE web service transmissions. 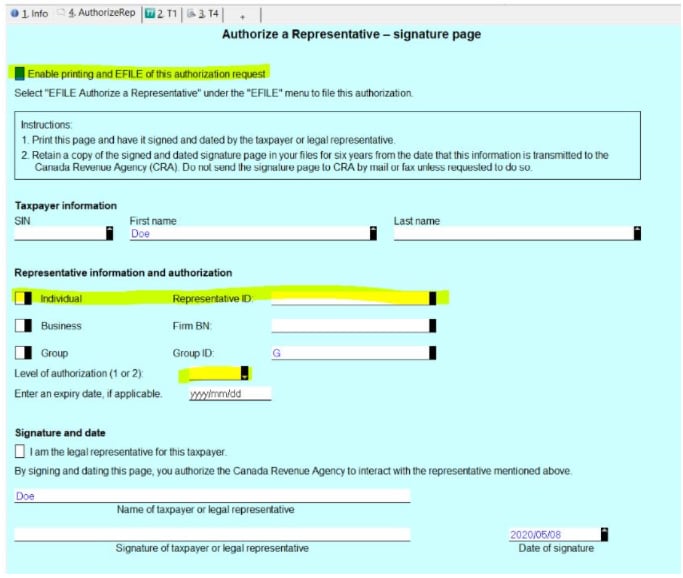 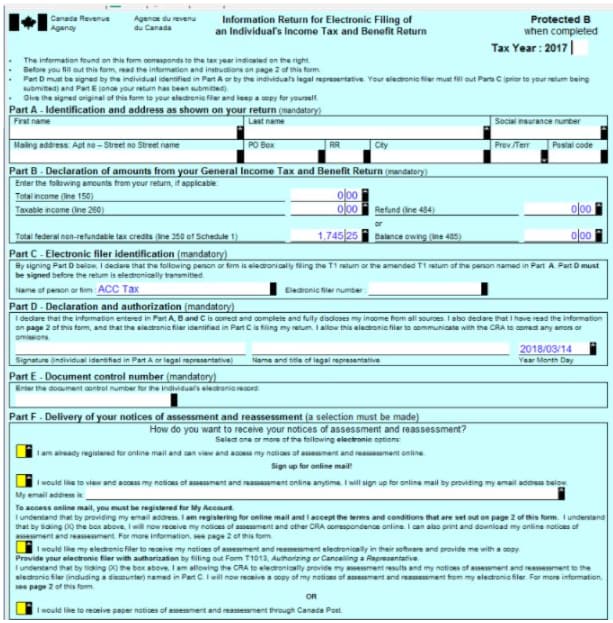 A letter R now displays on the T183 form indicating the form was referenced for the ReFILE:

This new designation is permanent and cannot be rescinded from the form.

3. Acquire a new sign-off from the client on the updated T183 form prior to ReFILE attempt.

The ReFILE process begins; preparers receive a confirmation window if the ReFILE is successful: 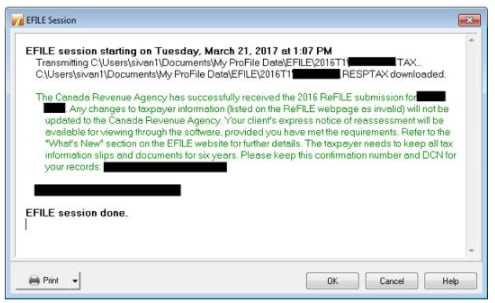 The ReFILE may be confirmed by examining the history of the return.

Does ReFILE submit only the new and/or updated information added to a return?

No, ReFILE will submit new and/or updated information, and resubmit any existing information remaining from the return's original EFILE transmission.

Can I use ReFILE for a return after the filing deadline has passed?

Yes, a ReFILE will be accepted by the CRA after the filing deadline.

Is ReFILE available for Quebec returns?

The ReFILE or amendment of a TP1 return is a ProFile feature now available; the form TP1FC is available in our 2019.4.0 release and later.

Returns can undergo batch ReFILE only from Client Explorer.

Is it possible to get a summary for changes to a return that was Re-filed?

There is no ReFILE summary feature available; it is recommended that preparers save a copy of the original return that was e-filed and also the ReFILED return for comparison.

Can I use ReFILE for a paper- filed return?

No. ReFILE on a paper return is not possible. A T1 Adjustment would need to be paper filed.

Does the ReFILE status of a return display in Hub?

No, Hub does not current display a ReFILE status.

How many times can I undertake a ReFILE for an EFILED return?

CRA will accept multiple ReFILE submissions for any single e-filed return. However, the online system accepts only nine readjustments per tax year for each taxpayer, whether the taxpayer, preparer, or CRA initiates the adjustments.

If the limit is exceeded, users receive an automated response stating tha the limit has been reached. Users can make additional requests on paper, preferably using Form T1-ADJ, T1 Adjustment Request, and mail them to the CRA.

I'm getting an error from the CRA that my EFILED return has not yet been assessed; does this mean I cannot ReFILE?

A return that was EFILED must have been assessed by CRA before a re-file is possible; check your My Account feature on the CRA website for the status of any EFILED returns. When the initial EFILED return has been assessed you may ReFILE.

Where can I get more information about ReFILE?

You can visit the CRA's ReFILE page for more information. It includes service exclusions and limitations, as well as restrictions on the use of personal information within the service.